All automobile manufacturer's have Recall Notices if defects are found. Since Owosso Motor Car is closed, I believe it is up to this club and it's membership to carefully record defects and find remedies for problems with our Pulses in regards to safety issues.

The Litestar/Pulse has had a good safety record. Probably the best record of a Jim Bede design. This page will report any known safety concerns related to this vehicle, so that owners may have a better understanding about this aspect.

But lets face it, our vehicles generally have very low miles for a 15-20 year car. One reason may be because it is not easy to find someone to work on it.....you can't just lift up the hood to inspect the engine. The rear body panels must be first removed. Owners may have been disenchanted after the novelty wore off and break downs left them stranded.

Our club is growing in membership every year. More Pulse are back on the road as new owners recondition their cars and bring them to the national rally. Some of these cars have sat outdoors for years and rust is taking its toll on frames.

This webpage attempts to put a handle on all aspects of Safety. Thanks to those owners who have added incite to this webpage and if you have additional comments, please email the webmaster........steveschmidt at hotmail.com

WHAT ARE THE MAIN CONCERNS

Here are a few of the points of your Pulse which should be inspected today:

Outrigger Attachment Points and the Main Tube of the Pulse Frame

Since the manufacturer used spray in foam around the outrigger attachment points, it is difficult to determine the amount of rust which may be eatting away at your frame parts.

Also you should remove your carpeting and inspect the Main 5" round Tube for rust.

This tube is 1/8th inch thick and Phil Dawes reported that when rebuilding his Pulse the Main Tube was completely rusted through in several areas. His Pulse had set outside in Michigan for most of its life.

Where the front forks and neck are attached to the Main Tube is an important area to inspect and difficult to do. There is alot of stress in this area at 70 MPH.

From Bob Hichborn of Florida....

From my experience, I have found 2 main areas to inspect the Pulse for rust and the potential for structural failure. The first place to look are the 4 exposed outrigger attachment points. If your vehicle has ever been exposed to water (this includes washing it), the potential for water to have been absorbed into the foam material surrounding the steel components is high. The vast amount of water evaporates in time, but a percentage remains in the foam and then acts as a rust forming agent to the surrounding steel. Inspect these areas thoroughly for signs of rust. To do this properly, I would recommend removing both of the outriggers. 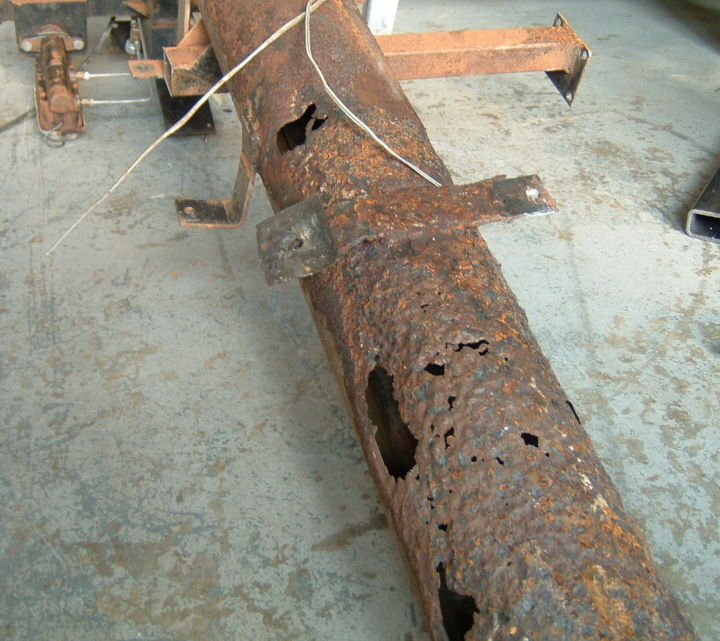 The second location is the center steel tube. Both open ends of the tube are exposed to road debris and water, during driving. Over time the build up of debris in the tube captures water and again creates areas for rust to form. Unlike the outriggers, the inside of the center tube isn't painted, so the bare steel is instantly accessible to the elements. 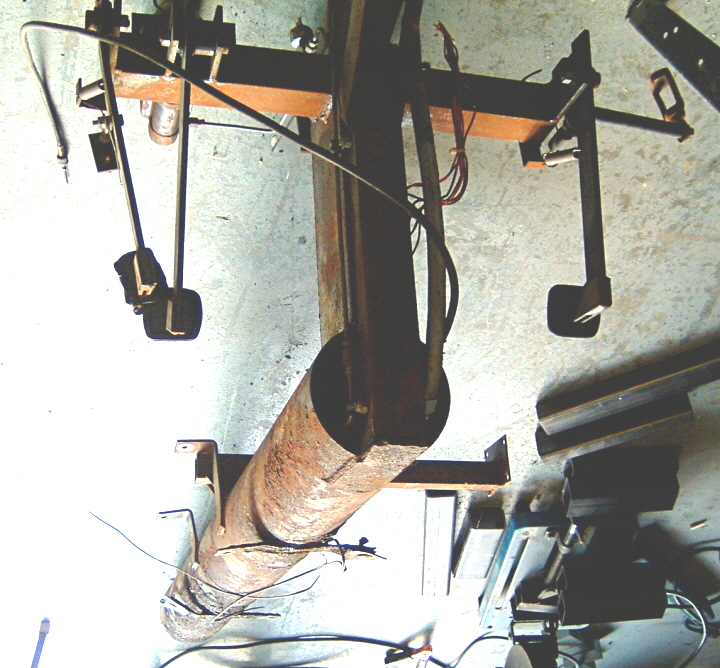 This component carries all the weight and stress between the front and rear of the Pulse and therefore has a high potential for failure under driving conditions.

I will say that if this center tube is that rusted, the owner will have known because the rest of the Pulse would have been in similar need for repairs. The case where the owner could have issues, is if the Pulse was cosmetically "restored" and never fully inspected. In this case a pretty paint job could be hiding structural issues, which will not become apparent until failure occurs.

The other area of concern on the Pulse, which has nothing to do with rust, is the design of the throat. This could take a few paragraphs to explain.

I have put almost twenty thousand miles in my Pulse over the past year and a half. I want to let you know about a condition that can be very dangerous when driving your Pulse. All of this came about one morning when I was changing lanes at 70MPH on uneven newly paved road. I almost lost control of my Pulse when I had to change lanes for my exit. I can tell you I was truly thinking about selling it because of this incident. No way should this of been this much of a challenge to control.

After thinking about what could caused the handling to be so unstable I realized the shocks front shocks were extending. What I have done is limit the air shock extension in both the front and rear.

The outrigger height was setup with 1" under one tire with the other side touching. This was done on a flat surface as highways and roads have a slight crown, which will vary this initial setting height during driving. The limit of the shock extension has made no difference in the ride effect as far as bumps or holes, but has made major improvements in handling. The teeter toddle effect is no longer noticeable.

The earlier serial number Pulses (approximately 180 and below) use standard automotive coil over shocks. The problem with coil over shocks is there is no adjustment for load. Some say use motorcycle shocks but you still have no easy way to adjust the load to control the outrigger ride height.

If you run the outriggers touching full time the tires will wear out with in about seven hundred miles or less, believe me I been there done that.

Ill get to the tire wear problem later.

Pulses with later serial numbers have air shocks front and rear. I have added an onboard air pump that allows me to adjust the front or rear for different loads which controls the outrigger ride height. I had limited the extension of the rear shocks a while back and that made a big improvement in handling. But I had no real control over knowing how much air to put in the front shocks to adjust for outrigger height.

I had to sit in the Pulse fully loaded for travel and run the air pump and rock the Pulse from side to side until I could feel the outriggers bump. Then I knew I was somewhere close.

Crosswinds and maneuverability at high speeds have always been a challenge when driving my Pulse. When ever the Pulse is pushed by a cross wind or from maneuvering the air shocks will unload and the suspension will rise which means increased outrigger tire height. Correcting for this movement causes further increase of the air shocks to lift and the handling suffers more.

After limiting the front shocks along with the rear the crosswinds are no longer a challenge that same area in the uneven road is safe and it handles like a sports car. It has made a major improvement and is much safer to drive! I have found this set up that works very well and has been worth the effort. Pulse drivers beware especially aware of uneven payment even more so than driving a motorcycle!

One owner was trailering his Pulse and the windshield blew out because he had the Pulse backwards on the trailer. Air came into the cockpit through the cracks in the back of the canopy.

Chuck Knight's windshield blew out while he was trailering it. I want to bring to attention a safety concern. I drive my Pulse almost daily I have regularly had to reseat the windshield into the gasket. Replacing the windshield gasket helps but does not correct the problem.

This also creates a problem in securing the windshield. There are several possibilities to correct this problem. Bonding the gasket to the body and windshield with silicon adhesive or a cyanoacrylate (superglue).

If you decide to replace the gasket its a two person job and will take you several hours to complete and a pint of Windex or soapy water.

A couple of items I would bring up concering safety of the autocycles one is the attachment point of the front steering assembly to the frame. The two main bolts should be checked periodically for looseness. I had mine loose for some time and never knew it until it was lifted for painting! they should be secured with safty wire by drilling through the head and tied to each other in the direction that makes them TIGHT.

The second issue is steering, this time its the steering rod itself. While towing a PULSE to its new owner I found the steering rod had come loose, and had actually bent to the point of almost breaking. You would have never known it, because of its location.

Some of the earlier Litestars (like mine) had what I would consider questionable welding.. and lack of gussets.. another point to consider.

I also added a fitted 3/4 in plywood bulkhead/rollbar just behind the rear pass seat and forward of the gas tank which gives support to the rear cowling. Making it a firewall and almost crush-proof in the event of a roll over.

Here is a Front Wheel Modification by Don Willi that makes removing the front wheel a snap.

Pulse Fire in Granbury, Texas
The following letter was sent to all dealers regarding the death of Clarence Greenwood, a Litestar dealer who was killed on Saturday, August 31, 1985. Clarence's death is the only one known in regards to the Litestar Pulse vehicle. 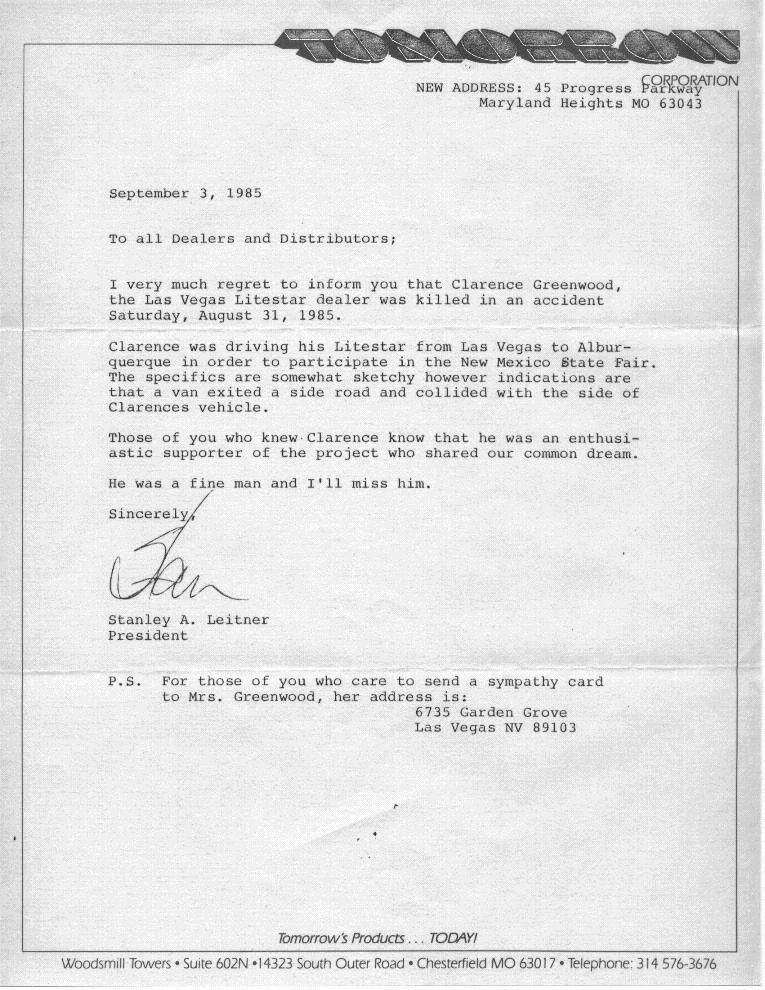 If you have additional comments about safety concerns,
please e-mail the Webmaster.